Never Ignore What Feels So Right 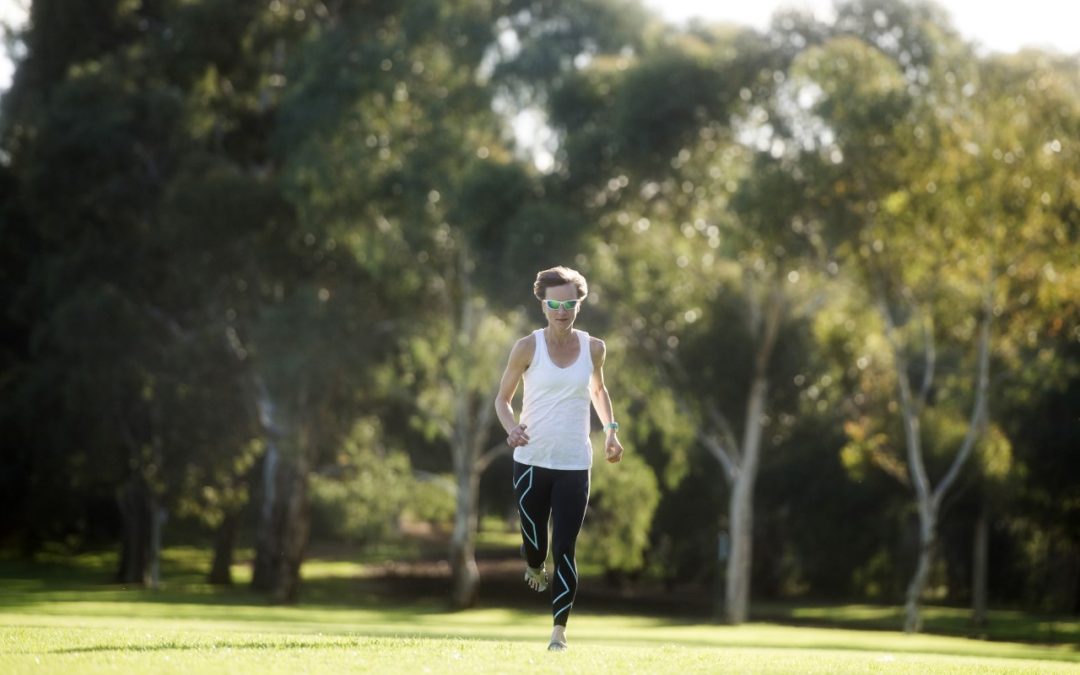 It’s such a great feeling, you know the one where you do something, or see something, for the first time and…

The feeling seems to come from something greater than yourself, your intuition if you like,  and it’s telling you to make sure you do whatever it takes to follow that path.

Then what? Are you just meant to ignore that feeling and go back to living life pre-instinctive insight?

When something feels so right that it just can’t be ignored, that’s a force too powerful to be ignored.

Here’s a little story about how I defied the naysayers and mainstream professional advice all to gain back control of my feet.

My Love Of Running Develops

It was at the age of 24 when my love of running developed.

Because I worked in the fitness industry I had free use of the gym so, for my own personal fitness, I’d run 10 kilometres 3 times a week on the treadmill in between shifts.

For me, nothing felt better than cranking up some tunes on my headset and just going for it. I felt fit, strong, and powerful, unlike any other form of exercise, and it helped me to release any negative feelings such as stress and anxiety.

The harder my run, the better I’d feel afterwards (gotta love those endorphins).

A Barrier Is Created

The sharp knee pain began about a year into my running regime together with shin splints. Not a good thing when you rely on your body to earn you income.

I Needed A Quick Fix

One thing led to another and, sure enough, I ended up deciding to follow the path of wearing sports orthotics – it was either that or stop running, not to mention lose the ability to teach aerobic classes.

Because my physical body earned me my income the decision to use orthotics was a no-brainer for me.

Which Did The Job For Around 14 Years

For around 14 years I managed my feet, my knee pain, and the occurrence of shin splints, by ensuring I wore a good supportive training shoe together with orthotics that I had remade every 3 years.

To Remaining Conventional Or Move Out Of The Main Stream

At age 38 no amount of new training shoes, or upgrading of orthotics without new moulds cast, would cut it anymore. Sharp knee pain would set in a few minutes into my run.

A quick bit of history behind option 2

It’s quite uncanny how only about six months prior to suffering my knee pain again I had read a book about minimalistic running. The thing that really stood out to me about minimalistic running was the fact that it involved a running style that every single toddler uses when they are running barefoot before they are conditioned otherwise. It incorporates landing in a way that we all land whenever we do any other high impact move – that being forefoot to heel rather than heel to forefoot.

I believe it had a lot to do with a certain company making a lot of money – but that’s a-whole-nother story.

Anyway, on with the story.

Can you guess which option I took?

Taking Control Of My Feet. 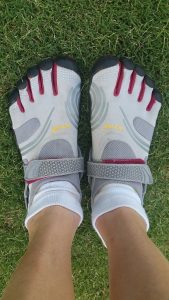 I bought myself a pair of minimalistic running shoes

Yep, they certainly looked a bit different, so much so that they attracted a lot of attention. It seemed anyone under the age of about 60 found them quite hideous. But I didn’t care. I knew how good they were for my feet – that was all I really cared about.

They certainly felt different too. However, the different felt sooo good. It felt sooo right. It was that instinctive right that told me these shoes were the right thing for me. My feet felt free. I felt much more nimble. How could anything that felt this good be wrong? I absolutely loved the feeling I gained from wearing minimalistic shoes.

So I started doing everything in them from walking to weight training, to teaching high impact classes, and boy did it feel good. I felt light on my feet and almost childlike in nature when I wore them.

The Naysayers Had Their Opinion

I worked in a gym where pretty much everyone, including staff and clients, believed that traditional sneakers were the only way. Fair enough, after all, it’s what we are all taught. As a trainer myself who had been taught a traditional running technique and the type of shoes best suited to running as part of my qualification, I completely understood where people were coming from when they passed on their unsupportive advice.

However, I had read new information that to me was undeniable and I certainly could not deny how “right” wearing these unconventional shoes felt.

I remember teaching a 6:15 am high impact aerobics class and, soon afterwards, feeling some pain in my right foot. By the end of the day, my foot had exploded in size. Mmm – Check out the foot on your right. I think I may have pushed it way too hard too fast.

The inevitable happened because I broke the number 1 rule when transferring to minimalistic shoes, that rule being….ease into them.

Coming from a background of orthotics and highly supportive training shoes meant I should have eased into them even more so than the norm.

Dealing With An Undiagnosed Injury

A couple of days after causing the injury I went for X-rays but nothing showed up.

I left things for a couple of weeks in hope that healing would take place – but I still felt pain as I limped everywhere slowly.

I ended up seeing a sports physio. X-rays where taken but, once again, nothing showed up. We had no choice but to treat my injury as a soft tissue one.

Ultrasound, strapping, and strong advice from my physio to stop wearing those minimalistic shoes.

I was advised to go back to wearing orthotics and a good supportive training shoe.

Do you think I listened to that advice about going back to a normal trainer – hell no!

How could something that felt so right be so wrong?

Sure, I had an injury, but it was only because I pushed things too hard too fast. My feet were basically used to being wrapped up in cotton wool for 14 years and all of a sudden I made my feet muscles work overtime with what little strength they might have had.

I kept going to the physio for the ultrasound treatment, I learned how to strap my foot myself through observation, and I kept hobbling along in my minimalist shoes because there was no way I was going backwards.

I am now pain-free, orthotic free, and using minimalistic shoes for pretty much everything, including running.

It took a good 9 months for my foot to heal enough so I could teach classes and walk around all day with no pain.

Another 3 months after I started visiting a more unconventional podiatrist I was able to run for the first time in over a year – and boy did it feel great.

I remember my initial podiatrist, the one who supplied me with sports orthotics, telling me that my foot and leg bones had set in place and there was no way they could be changed. I’d be faced with having to wear orthotics for the rest of my life and for all my waking hours.

However, through taking back control of my own body, by being open-minded enough to take on the knowledge of a book I read, by following my intuition, and by going against the mainstream, I have learned this is not true.

Feet bones are highly malleable and, thanks to wearing a shoe that encourages my foot muscles to work, my feet are so much stronger.  Even their shape has changed from being long and slender to now looking a lot more muscular with more width at the forefoot area.

I continue visiting the same podiatry clinic that, by the way, is no longer considered “unconventional”,  for quarterly treatments which enable me to run 10 kilometres minimalist style 2-3 times a week. I wear my minimalistic shoes as much as I can because I know they keep my feet strong and functional.

If I had of ignored that feeling inside that let me know that the minimalistic path was for me, I truly believe my feet would be even weaker today and I’d have no choice but to be purchasing new sneakers every 4 months, new orthotics every couple of years, and having new casts made every 3-4 years. With all that, I couldn’t even guarantee I’d be able to run anymore, something I still love doing to keep fit.

The Motto Of The Story:

I believe taking back control of your life requires you to follow that feeling of complete knowingness, that intuitive drive, no matter what anyone else says or does. We are all put on this planet for a special reason and when we receive insights from something higher than ourselves to follow a certain path we should never ignore it, even if it means moving out of the mainstream. In fact, I will go on to say especially if it means moving out of the mainstream (but that’s just me).

This is not the first time I have followed my intuition to create success. That’s why I say make sure you follow the path your feelings won’t allow you to deny…

Has your intuition ever guided you to follow a new path?

Has your intuition ever seen you follow the path less travelled?

Why not share your story in the comments below. I’d love to know more and I know your stories will help to inspire others to follow their instincts too.